After the OneR was released, both OneR and GPS Smart Remote, were made compatible by a firmware update during 2020. During January and April 2020 GPS Smart Remote got two updates to enhance its Bluetooth based communication side to the way the OneR - the same way later used for the OneX2 - have to be controlled. In comparison to the OneX those two cameras have their own BT menu to pair with the GPS Smart Remote whereas the OneX needs the OneX app as a mediator.

Speaking about OneR and OneX2 the GPS Smart Remote still fulfils both purposes but related to the standalone mode - keep in mind those cameras mainly use a touch screen to be controlled - the display of the GPS Smart Remote does not fully mimics what you see on the camera screen.

At the time writing that the current firmware version for the GPS Smart Remote is v1.0.8.2. If you remote shows that version at its first start or after a 9s press to the power button - later more to that - you have no need to update the firmware.

Like said above the gathered GPS data enhances images with the location taken, in relation of where the GPS Smart Remote was used to take the shot. Speaking about videos the GPS data is saved as a stream in an extra data field inside the video file for the primary lens. Again, at time of writing only the Insta360app as well as the OneX app provide the "Stats" function to generate a video overlay for reframed video only based on that GPS data.

A GPS Smart Remote with no binding to any type of device shows "Pls connect in app ..." on its display. This is the starting requirement for any binding process.

(1)USB Port is blocked by an extra plug on the port door but no waterproof or splash proof class is given.

(3)The microUSB port is somewhat recessed, so many standard cables do not fit.

The GPS Smart Remote show the following states by its led: 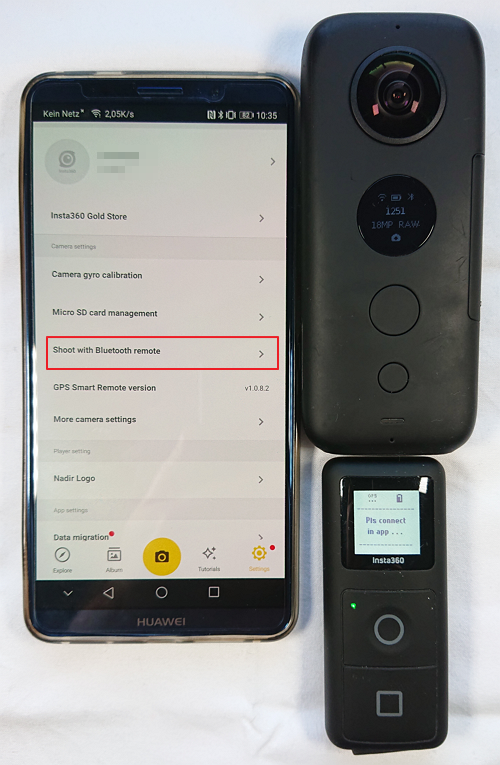 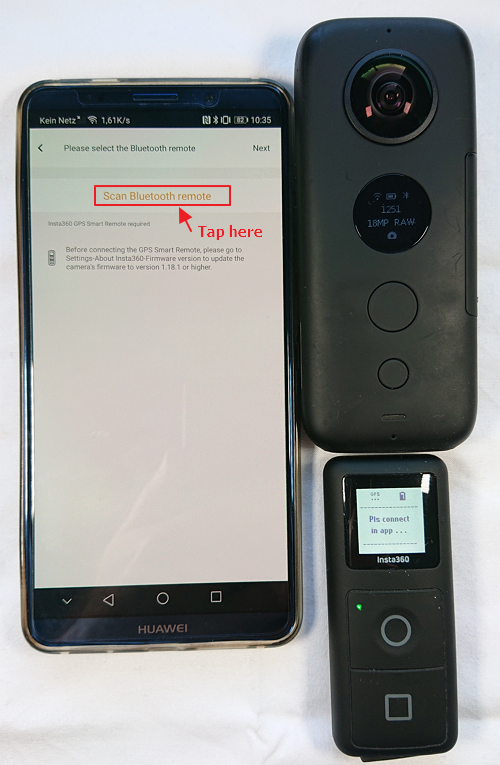 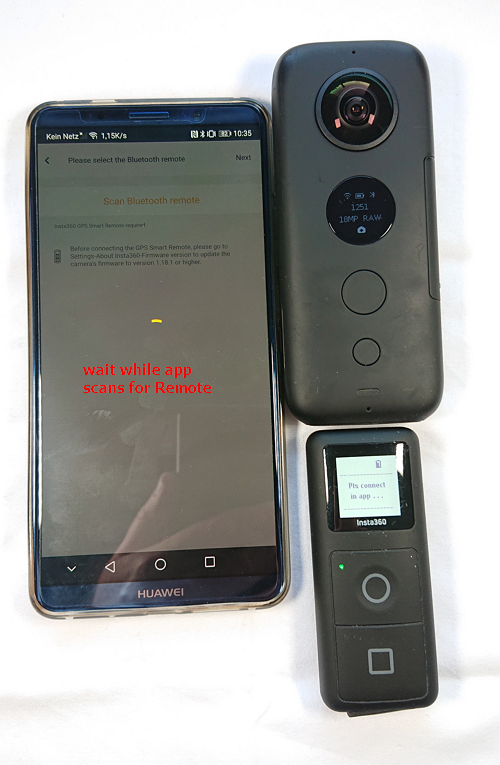 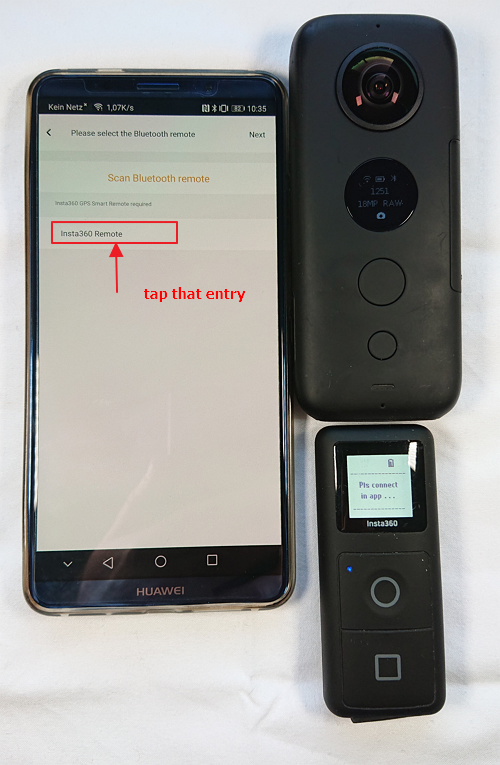 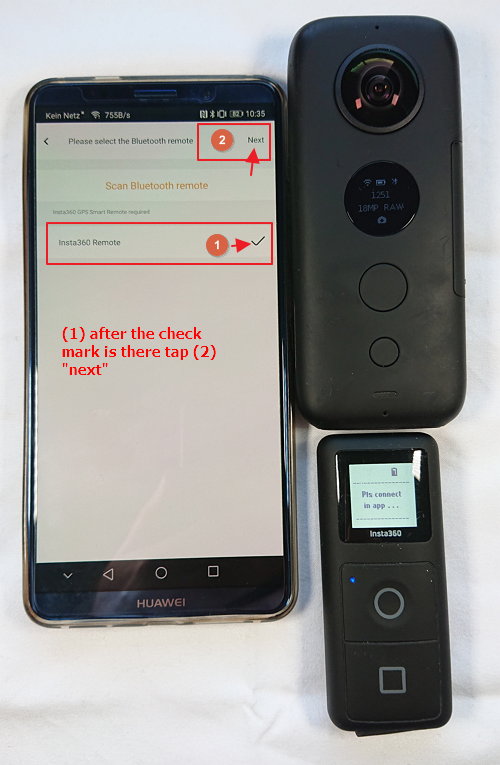 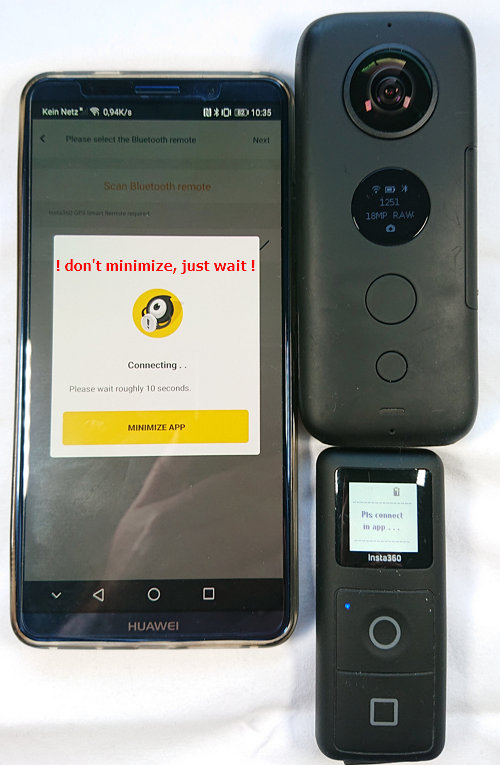 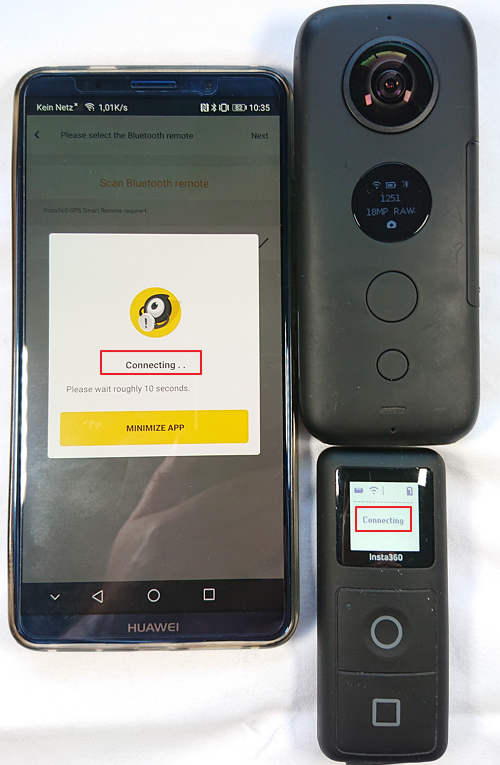 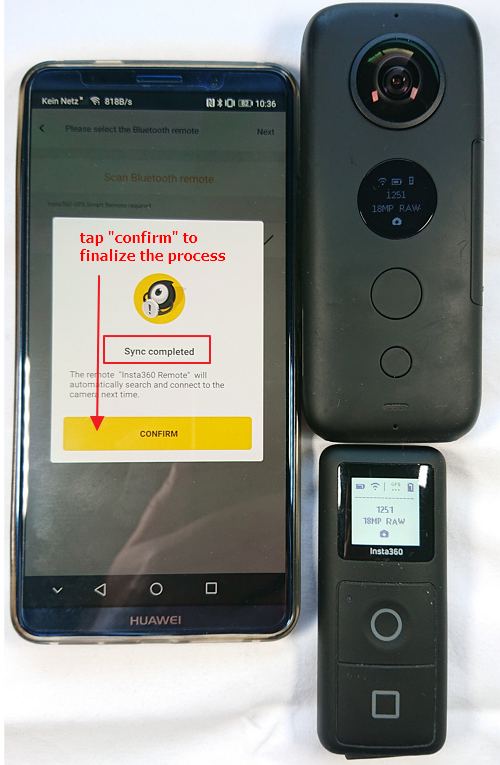 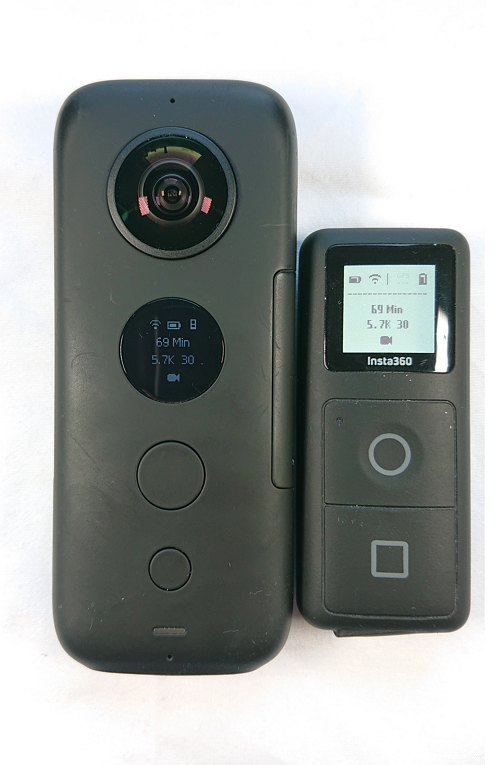 If you want to make sure you can not only switch OneX off by the remote but also power it on, do the following steps:

Now you can switch the OneX on and off by the remote. Test it. After that and especially if you use Android switch the WiFi mode back to "ON". As long as you do not remove the battery OneX remembers the power-switch related connection. Leaving it on "AUTO" should only be done if you use the iOS version of the app. By that state the app can power on the OneX and not only connect to its WiFi automatically. 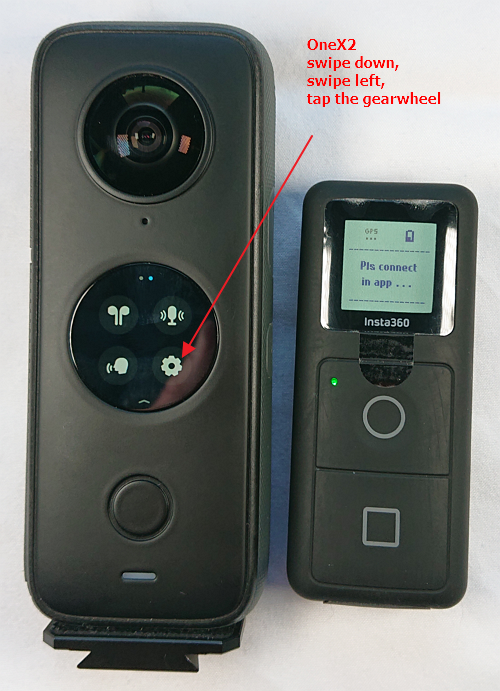 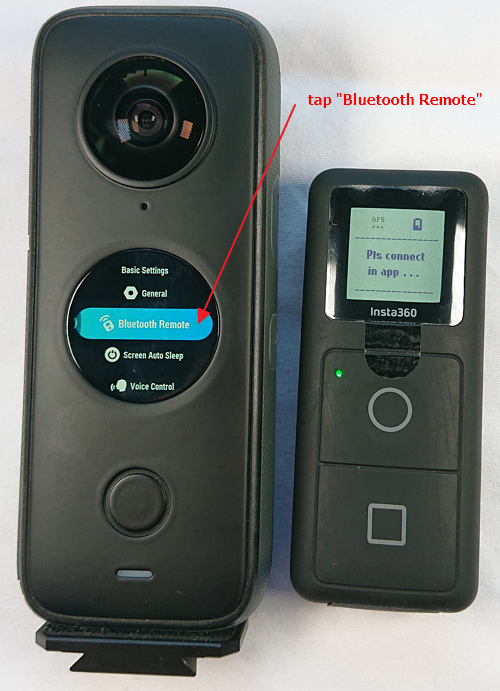 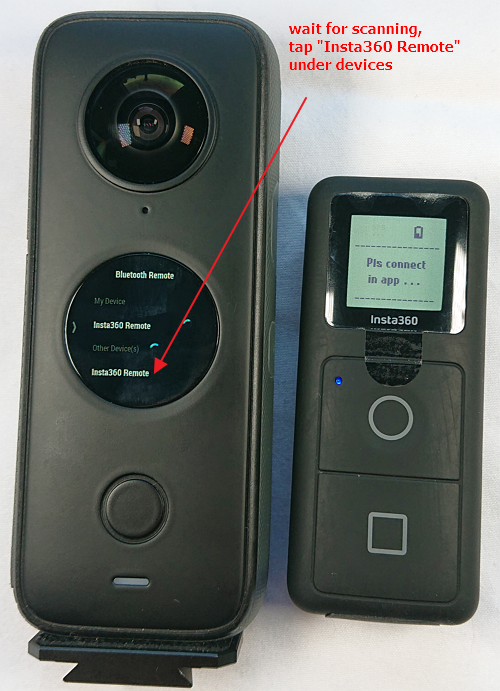 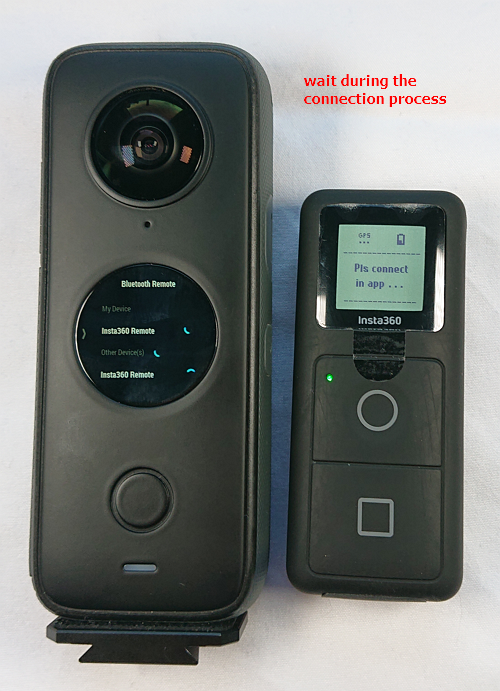 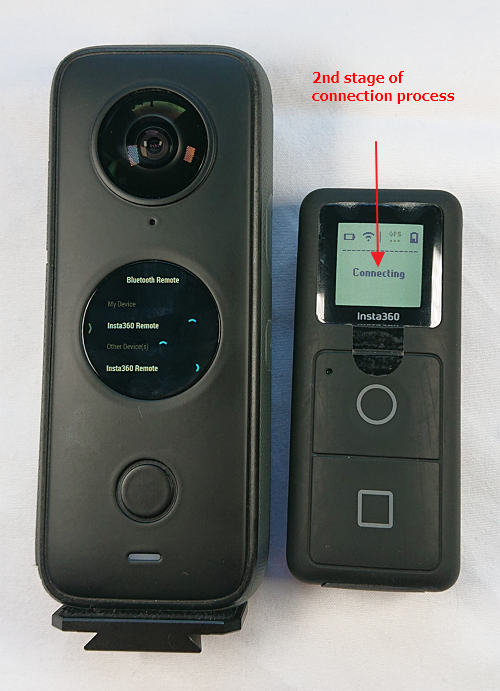 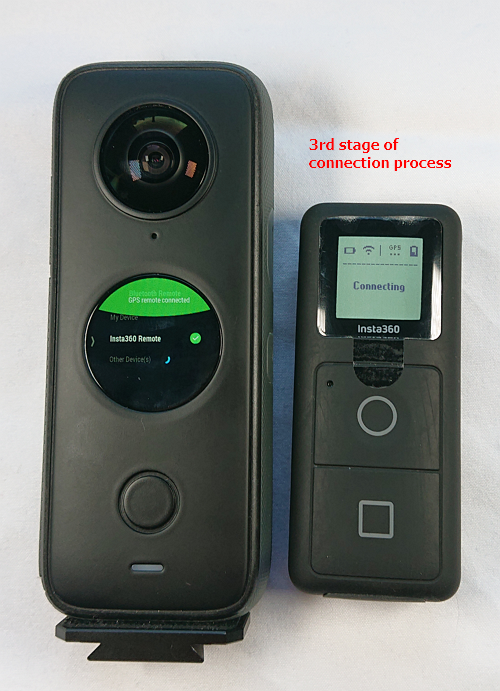 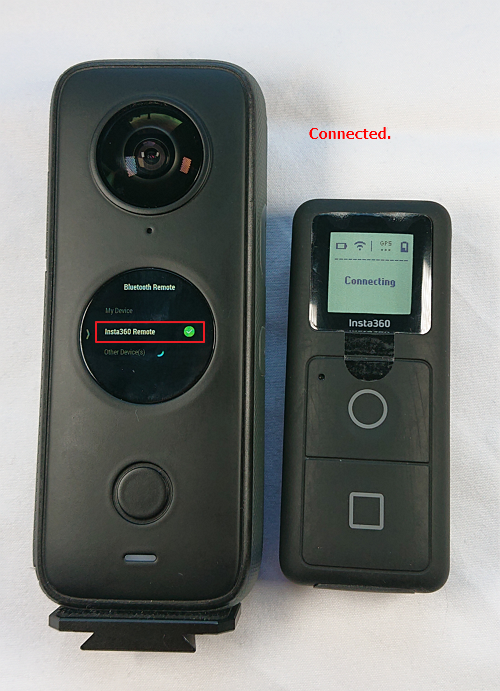 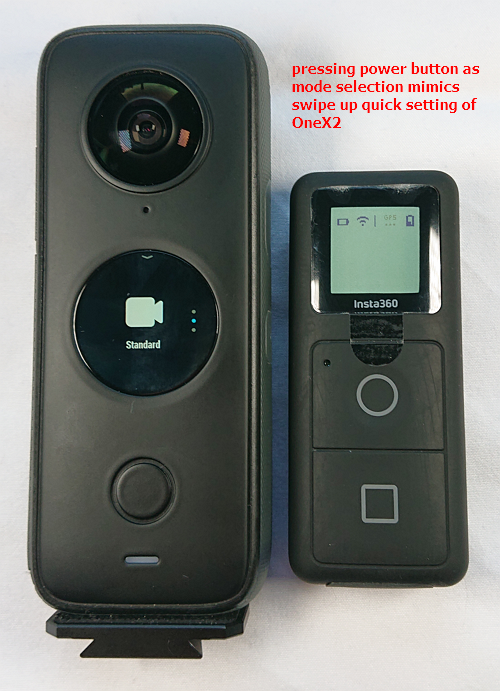 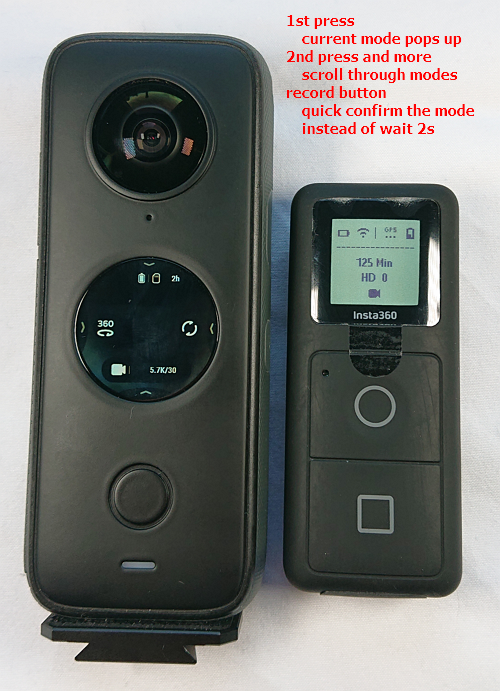 If you want to switch on your OneX2 with the GPS Smart Remote too and not only control and shut it down, please follow these steps:

Now you can switch your OneX2 on by the Remote and also by the app on your mobile device as it does a BT scan and wakeup signal. Personally I found that to work best with the iOS based app. On Android it nearly never worked for me, just like the OneX WiFi set to "Auto" which controls the same.

Press both buttons at the same time. The display will show again the "Pls connect in app ..." text and with that the pairing was deleted.

From time to time it may be necessary to delete the paring information of the GPS Smart Remote. This is necessary, for example, before doing a firmware update or using it with another camera.

Switch your GPS Smart Remote on by pressing and holding the power button for at least 9 seconds! The display will go blank, release the button at that moment and the display will start to show you the installed firmware version followed by battery health status.

The reset is better named restart. It does reset some internal parameters like it resets GPS acquisition data, but it does not reset pairing data.