With Insta360app v1.7.0 two things have changed. You now can use JumpCut to select different parts of a video to be downloaded as one clip merged with no transitions and the way to access trim-to-download has changed. 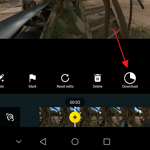 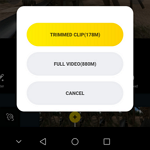 But like before v1.7.0 you only can download one part with normal trim, or a JumpCut trim as one clip. It is not possible to download a JumCut trim selection as individual clips.

While dealing with longer recordings you may encounter the wish to only download a specific part of a video as a segment. At first glimpse that does not seem possible, but it is!

In the camera apps prior the unified Insta360app you could do that by editing a trim while previewing the video before download. But in Insta360app using trim or JumpCut before the download only sets trim marks on the video and the download fetches the complete video in its entire length. 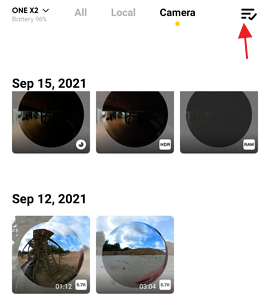 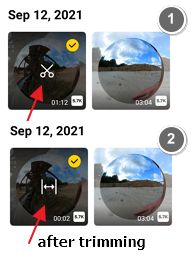 The trick is to select the video first. Like the first image shows you tab the multi-select icon in the upper right corner.

By doing the thumbnails get the upper right corner select circle with the checkmark if you tab them to be selected.

In addition a new scissors style icon is shown over the thumbnail. This icon indicates the possibility to trim the video before the download.

If you tab the scissors icon you get a trim view with brackets for start / stop. After conforming your selection with the checkmark in the upper right corner, the overlay icon changes from the scissors style to bracket like style showing that a segment was selected.

If you now hit the lower rows download icon only the selected segment gets downloaded to the apps storage. It creates an additional video file which has no representation on the camera, because it's a segment. As a result your created segment will show up on the "All" and "Local" area of the album but not on the "Camera" part where only the complete video is shown on which the segment is based but with no visual connection to it.

This works for all videos of cameras supported by Insta360app (Android & iOS).

Insta360app stores all downloaded camera files in its own storage area. Based to Androids file system organisation that is commonly located in the Android/data/ folder tree. In this case it is

Because the app supports more than one camera the downloaded files are organized in additional folders specifying the camera type they came from:

Under one of those camera specific directories you will find also a LRV/ folder which holds the LRV_* helper files and at least one Camera01 folder which contains the main files. If we take the OneX2 as an example the complete path tree would be:

It's up to you if you want to backup all files sorted by type for all cameras, which will mean you backup at galleryOriginal, or if you only want those files related to one camera type, or even only the main files.

Keep in mind on the SDcard each CameraXY - where XY is a two digit number starting at 01 - folder can hold up to 1000 files. If that number is reached a new CameraXY directory is created which number (XY) is raised by +1.

Unfortunately edits done in the app can not be backup, transferred or migrated to Studio2021 / iOS app... at the moment.. I hope that will change...

If you have content on a SDcard, or like I do, on an external USB-C SSD drive, you can move them back to those locations to access them with the app again.

Site note: Android 11 changes the game a bit. It's security rules do not allow to access all under r/Android/data tree directly. Doing so will look like that folder is empty. You can work around that by

To save a single frame of a 360° video as a 360° image is now pretty easy because both worlds (Android & iOS) as well as Studio2022 provide a way to do that. Just follow these steps.