Since the 21th of May 2021 Insta360 sells Premium Lens Guards in their online shop. Around the 10th I got some of those ProGuards - that's how I name them - for testing which includes opinion on quality, usage, integration in the software (mobile app & Studio2021). Since app version v1.5.3 and Studio2021 v3.6.6 they are supported in the triple-dot-menu (app) and the Stitching options (Studio2021) 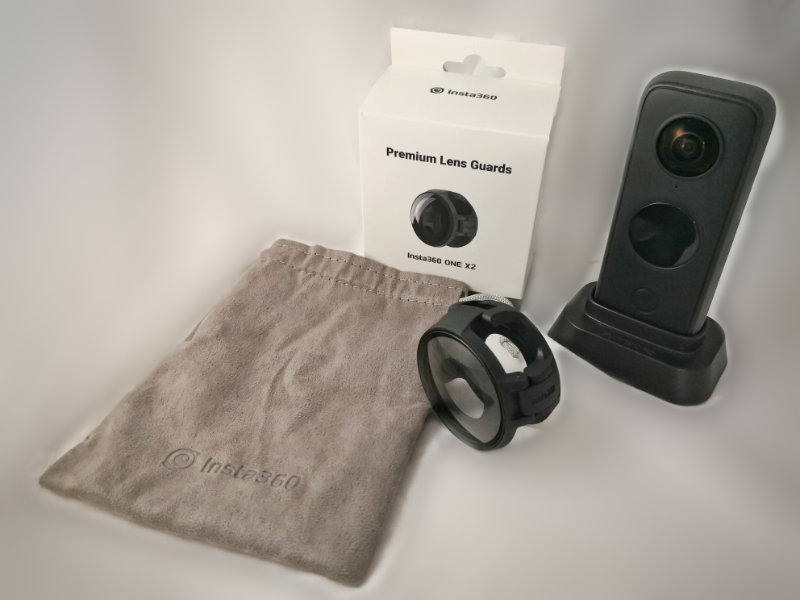 Currently you can order the Premium Lens Guards in Insta360 store for around ~$49.

By their design the Premium Lens Guards offer a way to quickly decide if it's necessary to protect your OneX2s lenses. They offer a good protection with none to nearly none optical side effects degrading the quality of your recordings, neither on images or video.

Side note: Based on my experiences and use of them above water, mounted to my cars roof / hood, on a long pole, taking images and video for Google Street View in shadow areas and in bright sunlight of a central Europe spring time.

They are something that you can carry with you in your camera backpack and quickly mount if you see any risk but at any time can oversee and are widely in control of the situation. Let's put it this way, their main purpose is to offer situational awareness preparedness through a quick, easy to assemble solution.

They are not - from my point of view - to protect your OneX2s lenses during any action sports activity, like on dirt bikes, while mountain biking or any activity where you need your OneX2 steadily mounted but the 1/4" screw mount rested.

If you need 360° 360° directional / spatial audio don't use the Premium Lens Guards, use the Sticky Lens Guards

Side note: Since around start of June 2021 comments on Facebook indicate Insta360 sends them to the customer with an additional pack of Sticky Lens Guards. Which makes sense because both lens guard types have different areas of application and support different usage behaviour. So it's a nice goody to get those too.

Besides that, personally I would have wished Insta360 had added a small microfiber eyeglass cloth. Why? You'll understand the first time you have them in your hands other than shown on the next image. ;) Mine collect fingerprints a lot and that cloth is pretty good to get rid of those.

But I expect you to be curious about the image quality you can expect with them for images and video, right?

Let me say it that way, I like them a lot! And for my kind of shooting they give me an easy way to make sure the expensive part, the OneX2 lenses, stay save. And while trying some shots above a river with a self made stick extension, they already saved my OneX2 to directly hit a concrete bridge pier.

If attached correctly they won't add any negative effects to your content, in normal situations. And if you want to take a look at some examples jump down to that chapter and have a look.

Personally I only had a negative impact in extreme lighting situations like with bright direct spot light during some night shots, which gave some ghostly double reflections of the OneX2 lenses and the area around them, or while not having attached them correctly. The last gave a stronger barrel distortion around the lens centre for near objects (<= 1m).

Having them the first time in my hands I was surprised. Before I only used the small Sticky Lens Guards which weight nothing with their 1.5g. The Premium Lens Guards feel valuable & solid. No wonder, with a weight of 36g. Which also adds to the OneX2 if mounted. 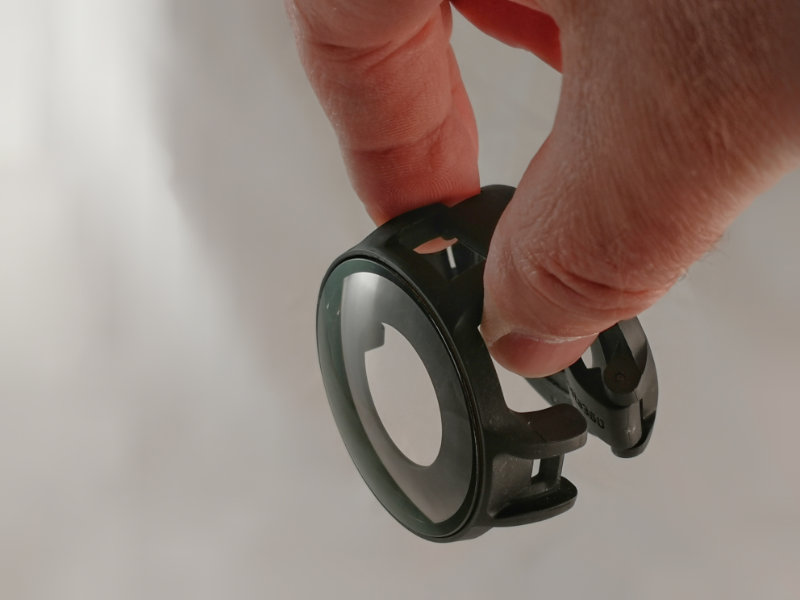 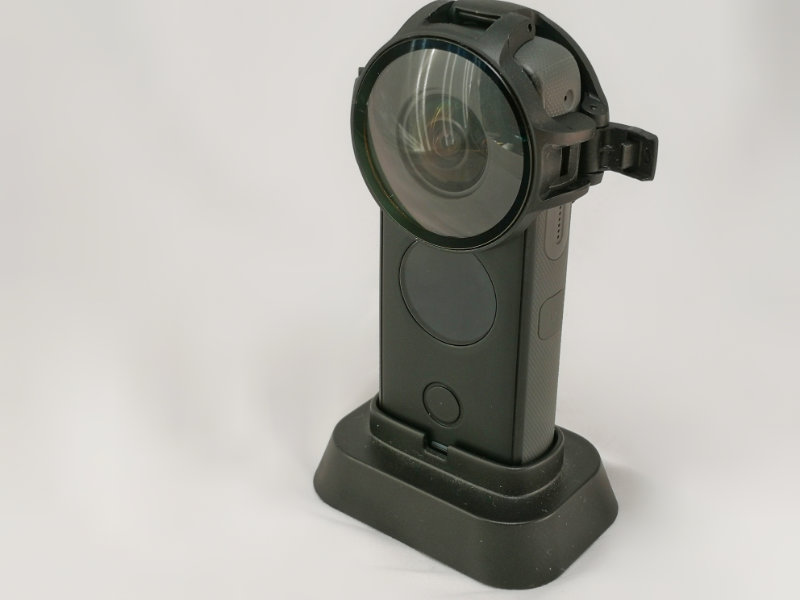 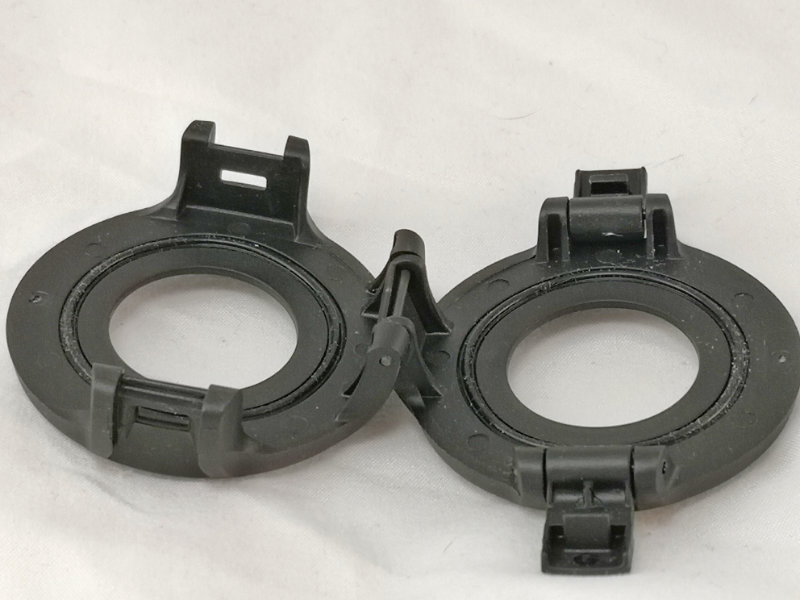 With that to know its clear why the Premium Lens Guards can be used underwater, at least in SteadyCam mode on which only one lens is used to record a video. By that a stitch line is avoided.

Remember, recording underwater raises the need to compensate the different refractions of all optical mediums which include the sealed air, water and the medium of the lenses. Those can only be done for 360° with a specialized dive case.

Their mechanism is their advantage and disadvantage at the same time. By the design it produces some side effects I will explain later on, but it allows it to do a fast cleaning of its glasses, blow out water condensate and small fluffs.

While handling the Premium Lens Guards its vastly noticed that - by all the protection they offer to the OneX2 - they limit some aspects of the OneX2.

First to notice is the ability to pull down the settings menu. If your OneX2 still runs a firmware before OneX2 firmware v1.0.23 you should update. Starting with v1.0.23 the top area to recognise swipe gestures now covers not only the few top millimetres but around the upper 3rd of the screen. This allows a normal use of the screen and access to all areas with out turning the OneX2.

Without the update, before v1.0.23 you will face the impossibility to enable the settings menu while the OneX2 is vertical because the Premium Lens Guards cover around 2mm of the top of the display. As the area firmware before v1.0.23 recognises gestures only at the top few millimetres that area is blocked.

So make sure to update to / above firmware v1.0.23 if you intend to use the Premium Lens Guards. 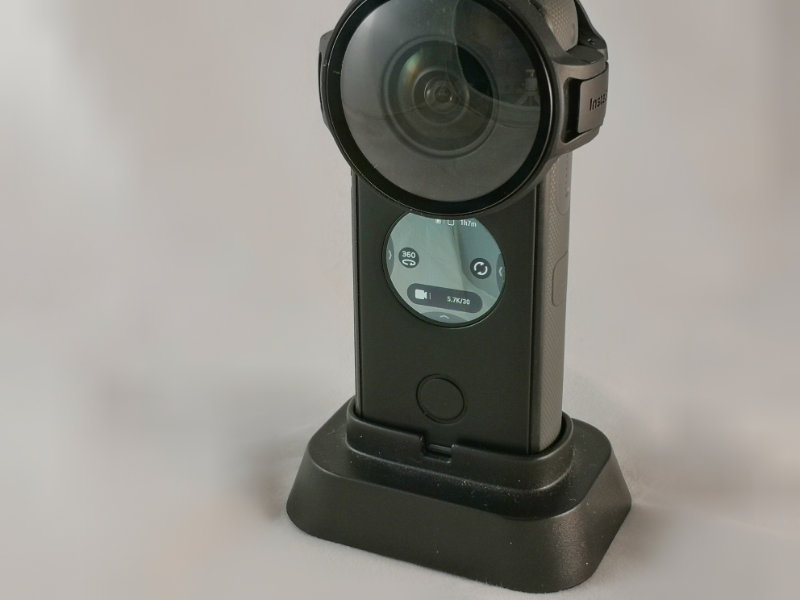 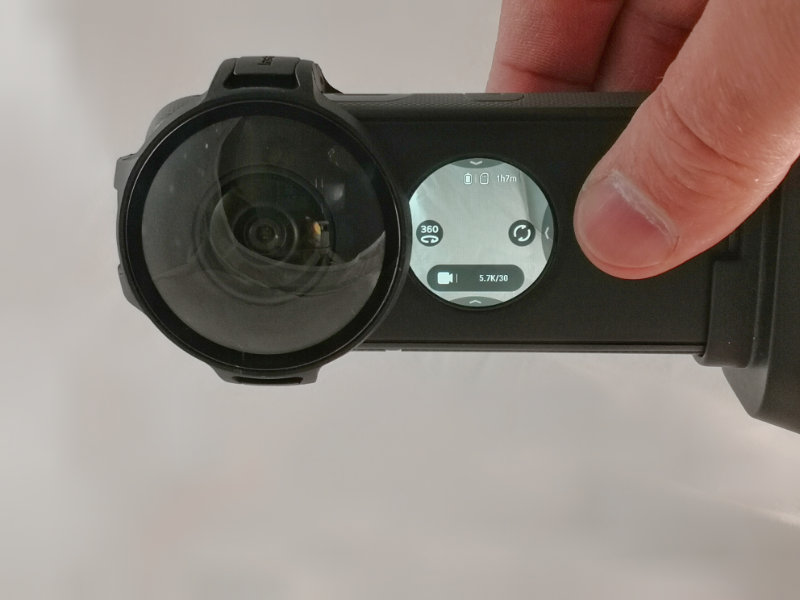 Another aspect in clear sight but fast overlooked is that the Premium Lens Guards cover two of the four microphones. They are not blocked but sealed because they are inside the area of the sealing rings. Depending on your sound settings and how you have mounted the OneX2 that can lead to some dull echoes of body transported sounds. For example if the screw mount is not properly tightened or if your Premium Lens Guards are at their correct place. Their design limit that error but it's possible for example by turning them around. So as a result, if you are in need to record 360° directional / spatial audio don't use the Premium Lens Guards. 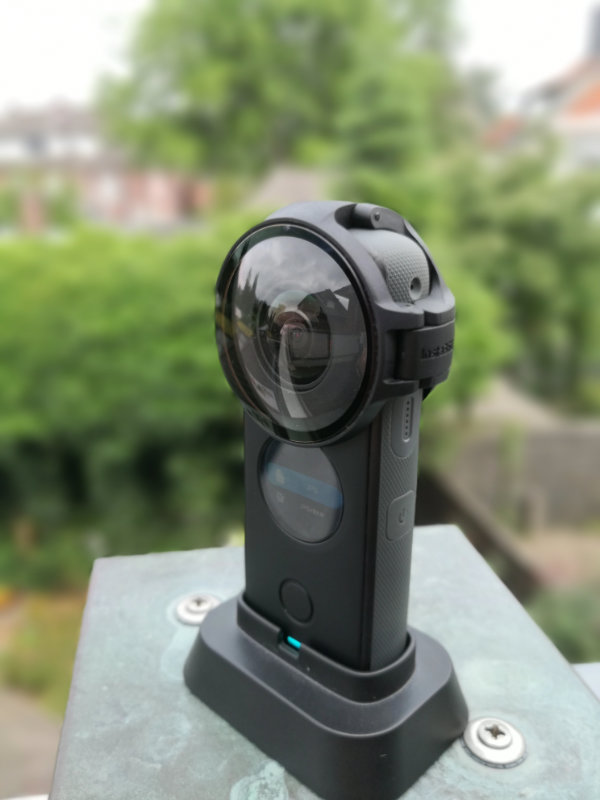 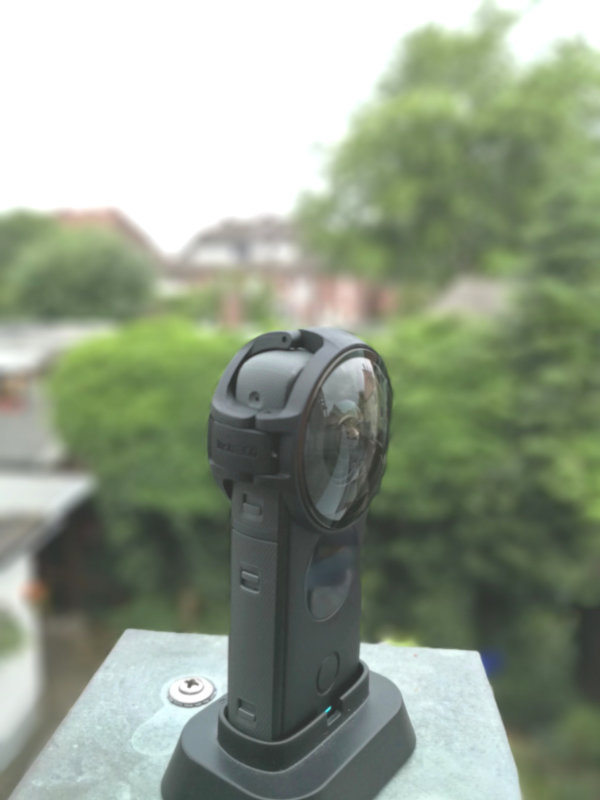 At third and that is so obvious that I allow me to mention it at last is that you can't use any utility frame with them. The latches are designed to keep them in place and tight to the pure OneX2 body, but that doesn't give space for any type of frame, either original Insta360 or 3rd party like Ulanzi. 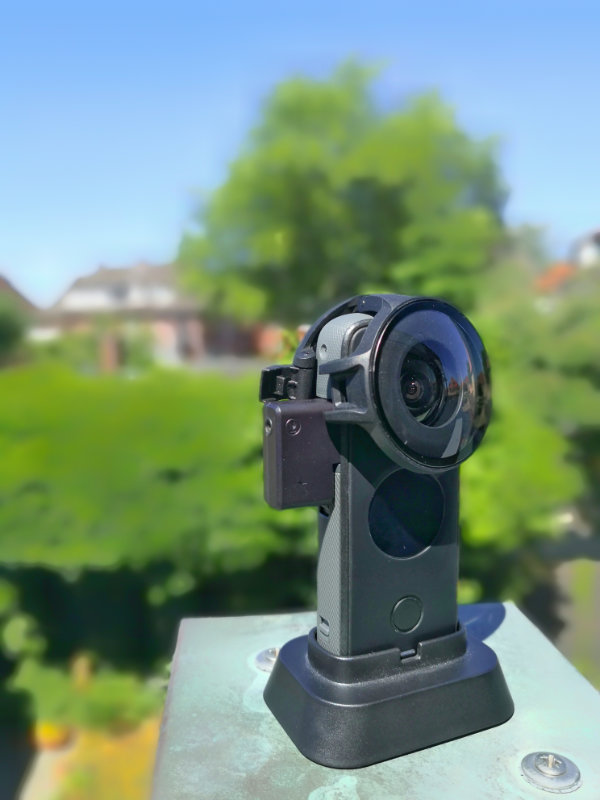 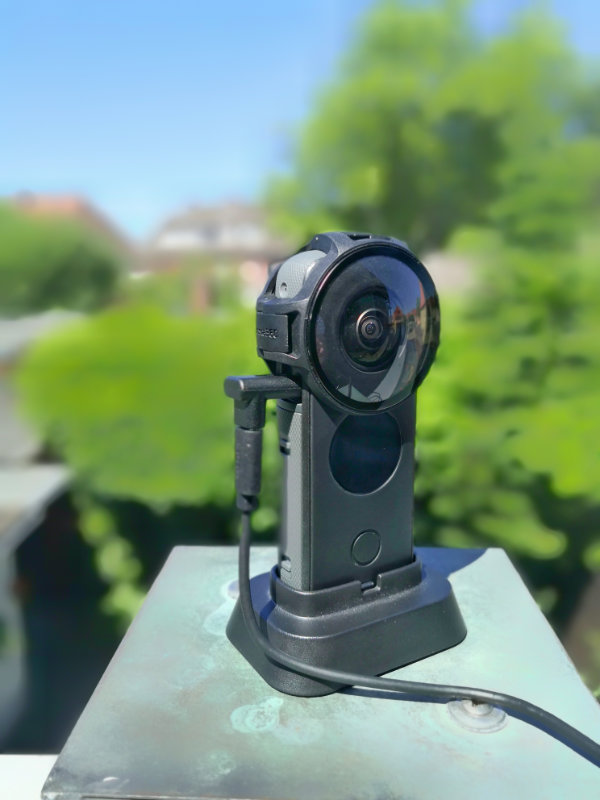 But that way you loose the water protection and should be considered carefully because not only water can enter the USB-C port-bay but also dirt. At least during usage, but to recharge your OneX2 while the Premium Lens Guards are mounted without removing the battery it's a good option.

Other than the Sticky Lens Guards the Premium Lens Guards have moving parts and should be handled with care. This is not only meant in terms of storage and placing on the OneX2, but also in terms of cleaning and removing foreign objects. The next chapter reviews that in more detail but you will notice these fine fluffs on the sealing rings.... those resulted in my cleaning of water drops with a paper tissue before storing them again. 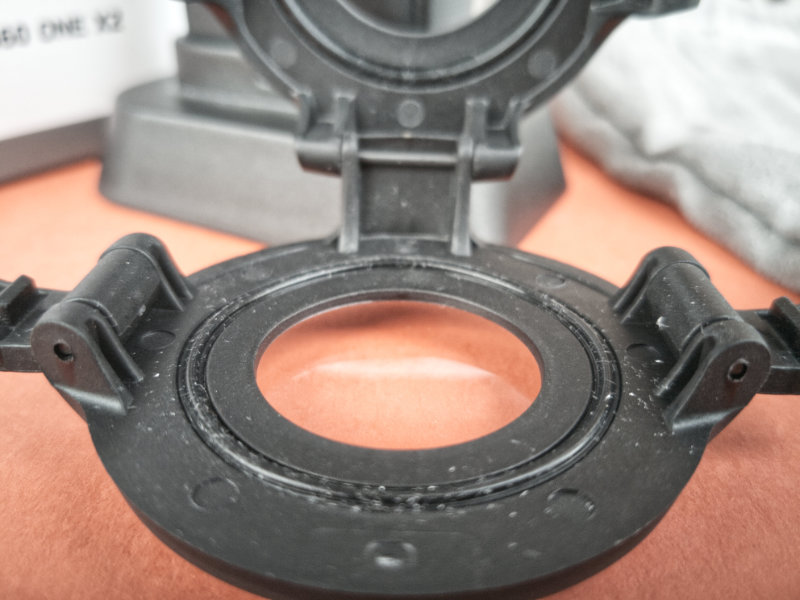 As said, the Premium Lens Guards seal air around the OneX2 lenses. By that they gain the ability to be used for SteadyCam recordings up to 10m depth. But it also means the glass lens on each side has a bigger diameter then the OneX2 lens. By that a space, a kind of niche is formed. 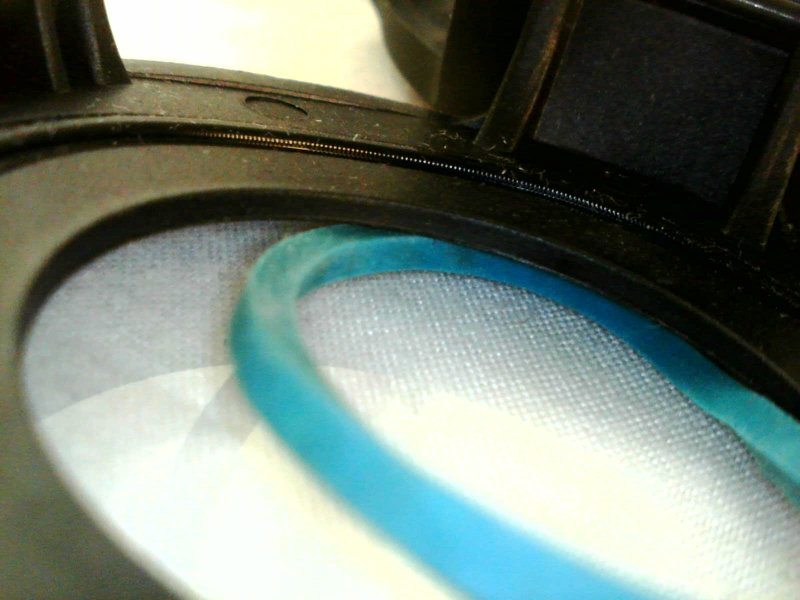 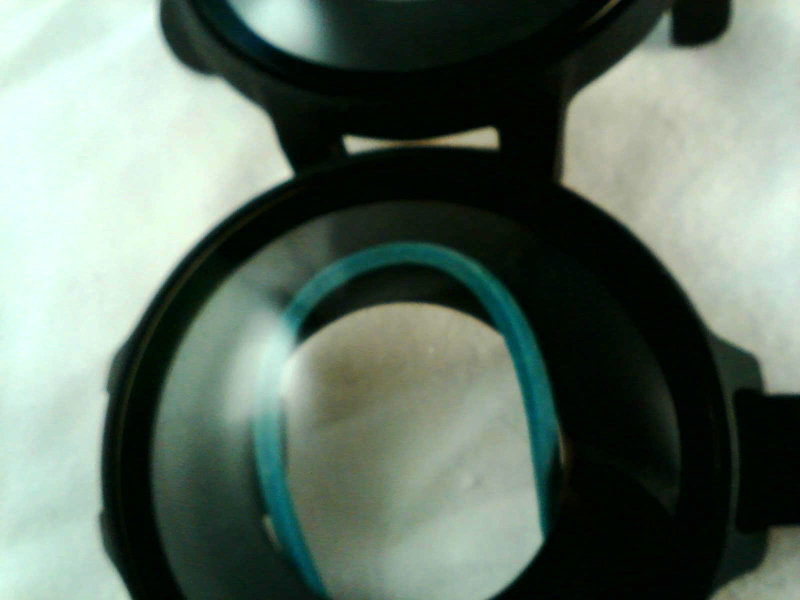 This niche is perfect to catch tiny little fluffs but it also leads to another effect, which will be noticed in some extreme situations like night shots with some direct light to the lenses. 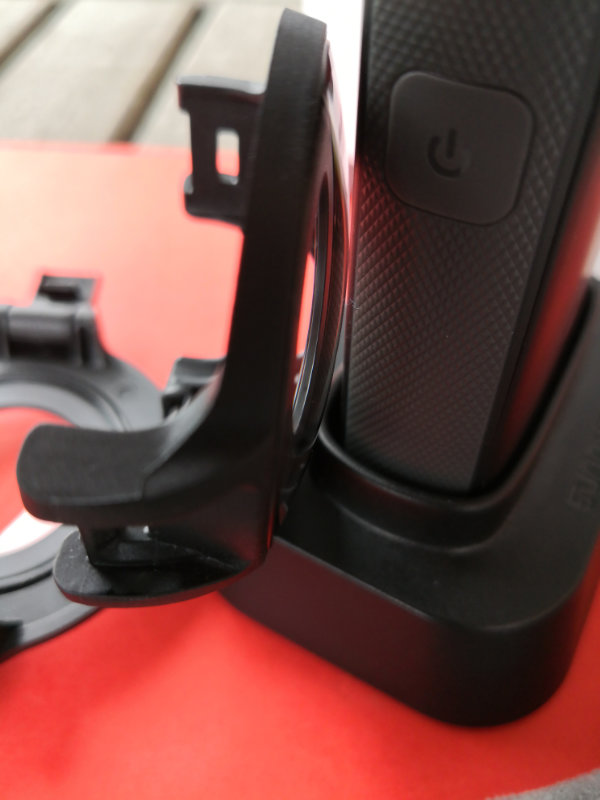 This image gives a very small hint of it. Unfortunately I haven't got an image of how it looks in a recording / image at night but the following one will give you an idea. 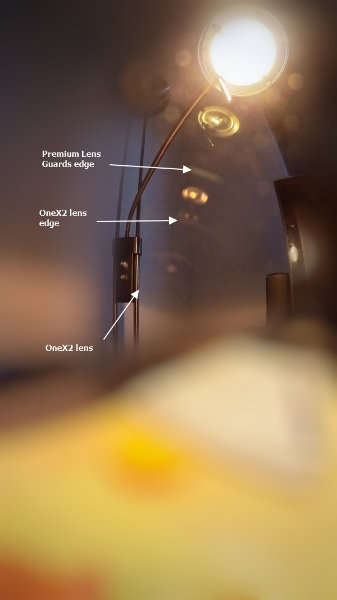 Also think of your cars shelf right above the dashboard and the windscreen. On most cars that is also black and in some lighting situations you see a strong reflection of it from the inside on the windscreen even if nothing is laying there.

The lenses are coated with some anti-reflex coating but - as far as I know and having cars in mind - that reflection is nearly impossible to prevent. I tend to see it like one of my teachers said it, "...every optical medium added brings its own effects with it... and you have to keep that in mind".

In normal daylight you won't see it because normally the background is brighter as the ProGuards "body" and can not result in raising the inner reflection rate of the glass lens.

The Premium Lens Guards are easy to handle. Their mechanism allows it to but attach them with one hand to the OneX2 and the moment you feel a greater resistance while trying to close them, you know they are not aligned correctly. So don't use force to close them!

You may have read the manual, so know the part with the latches belongs to the backside (non display side) of the OneX2, the other side covers the display sided lens. 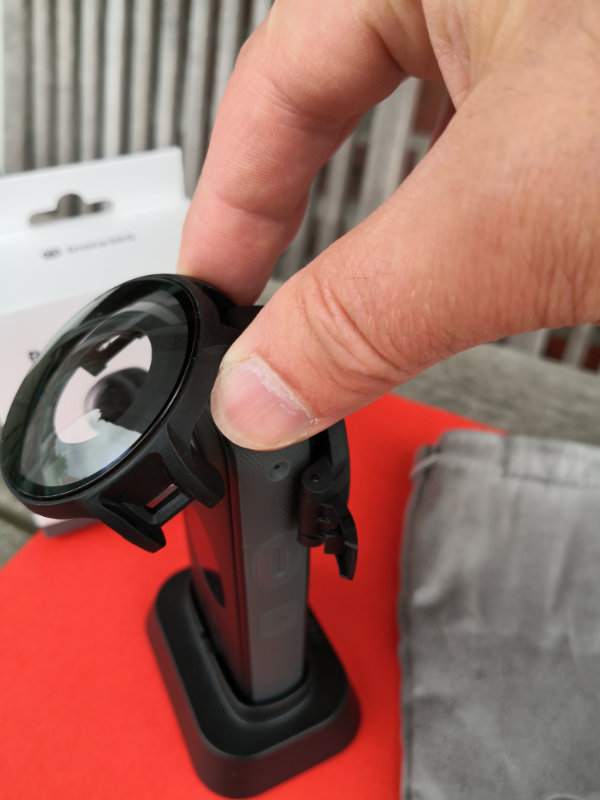 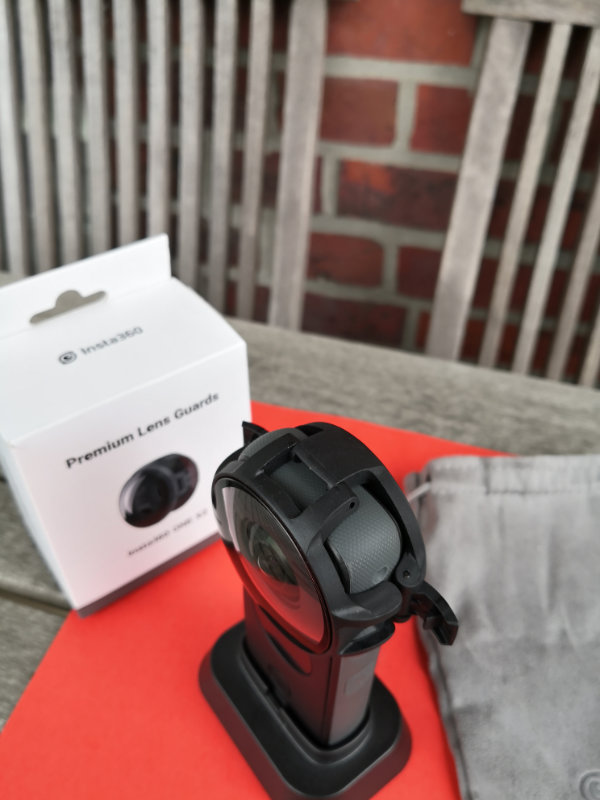 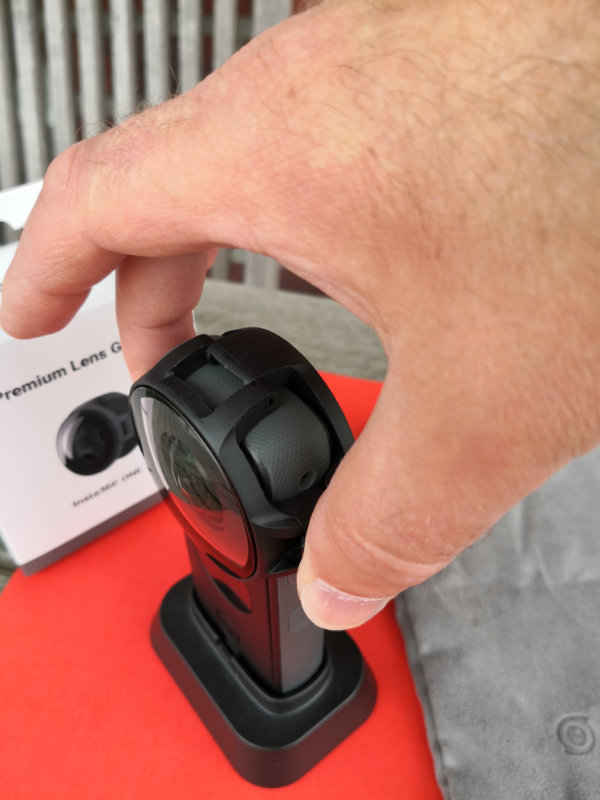 With four easy steps the Premium Lens Guards are mounted:

As said, any resistance while trying to close them points to a misplacement.

Cleaning the Premium Lens Guards is essential to have good results with them. As you see on the image with the lamp any fluff can be seen if you don't take care. The outside is easy cleaned with a soft microfiber eyeglass cloth and no force.

But the inner part especially the niche and the inner parts their are tricky. Actually I tend to use either one of those small air pump brush like they are already used for camera lenses or a small pinch of compressed air, as used for cleaning electronic components.

The best results I get with both because you need that little brush to get the fluffs out of the far edge. Air is only used for the inner part but not to blow into the lens from inside.

Thinking about storing the Premium Lens Guards you quickly discover that up to now there is no (official) case for it or the OneX2 plus Premium Lens Guards available. Hopefully that will change in the near future, either by Insta360 or a 3rd party source.

The best way to store them for me is

That way you limit the need clean them thoroughly before usage.

So your essentials are:

Here are some short example of how the stitchline looks like if "Premium Lens Guards" stitching option is disabled / enabled.

Last but not least we come to some example shots I've done with my OneX2 and Premium Lens Guards attached. Just click the links and you can view some shots in 360°. If you click >>inline<< some examples in 360° are loaded, by >>new tab<< those are opened on a new browser tab.

The following link directs you to one of my videos at YouTube. It shows a short drive in 360° where my OneX2 was mounted on my cars roof with a magnetic mount and the Premium Lens Guards were attached to the camera. As you see the optical quality of the lenses are really good, but you also see - at least at two timecodes - that it much depends on cleaning the lenses.

Have a look => Video: Insta360 OneX2 with Premium Lens Guards